The competitive trials of drone suppression systems took place at the range of UAV Tactical Center in Kolomna, Moscow Region, on April 27. Designer companies by turns interrupted operation of the military and civil drones.

The competitors were the portable droneguns jointly designed by the 4th Research Institute of the Russian Defense Ministry and LLC Location Workshop (LocMas), and the navigation field replacement system developed by a company not named publicly. 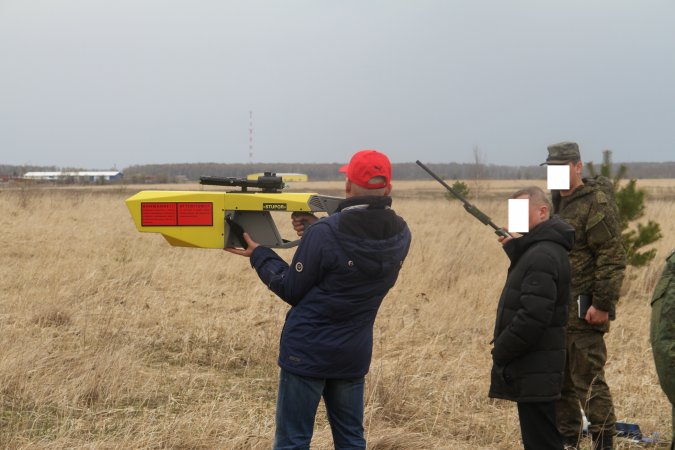 Testing of the dronegun at Kolomna range

The tested systems one by one applied electromagnetic waves against military UAVs Orlan, Granat and Eleron, as well as the most commonly used civil one, Phantom. The tests were held at different distances, starting from 50 meters. Then the distance scaled up proportionally until the effect of the suppression systems ceased.

STUPOR designed by LocMas managed to neutralize the civil UAV at 650 meters. The dronegun partially interrupted operation of Phantom at 650-850 meters. However, none of the tested systems could cope with the military drones. They interfered in the UAV navigation via GPS channels, but failed to damage Russian GLONASS positioning system.

"The point is that the military drones use other data links that operate within secure band", Dmitry Klochko, the LocMas director, shared with Mil.Today. He added that using "military" frequencies the dronegun would "land" even a tactical UAV.

The test report was made up following results of the trials. It will become a basis for the military to make a decision regarding the further developments in this area.