Announced at Army 2018 forum and being developed under Rationalizer-1 research project, the standalone unmanned submersible will kick off testbed trials in April 2019, a developer of the robotized system in the Institute for Telecommunications told Mil.Press Today.

"Currently, manufacturing of components for the research project codenamed Rationalizer goes on, it will last till February. Basic testbed and sea trials are scheduled in the end of spring 2019", said the interviewee. 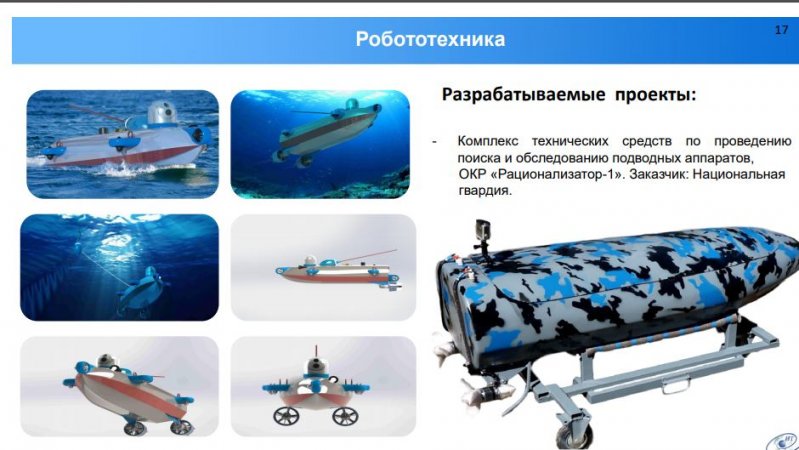 The system was ordered by Russian National Guard. Based on the open sources, the project development cost 35 mln rubles. The drones designers disclosed some of its characteristics to the press at Army 2018 forum. In particular, they reported that the systems control station could be based either onshore or on the boat. Surface speed of Rationalizer will be 10 knots, submerged speed  from 3 to 6 knots, depending on the operational mode. The drone will be equipped with a video camera, a thermal imager and a sonar system. In addition, the Institute for Telecommunications has developed software enabling to control the drones payload.

According to the specifications, Rationalizer is designed for automatic search, detection and survey of grounded underwater objects like caches or dead drops. Also, the systems functions include identification of objects and targets in the water (different submersibles or divers entering a secured zone). The drones operation is automated, along the preset route; in the process of the mission accomplishment, the control can be taken by the operator.

Designers plan to demonstrate Rationalizer at Army 2019 forum to kindle interest among the military.

"These projects have really promising future, especially in case of an import ban on such equipment. However, it is extremely difficult to make this vehicle effective, taking into account the lack of corresponding experience and the drones underwater operation mode, not acting as a surface boat", Mikhail Loktionov, director of Whale underwater robotics laboratory shared with Mil.Press Today.

Rationalizer will begin state trials in the yearend of 2019.