The LMAC concept was at the Army-2018 forum. 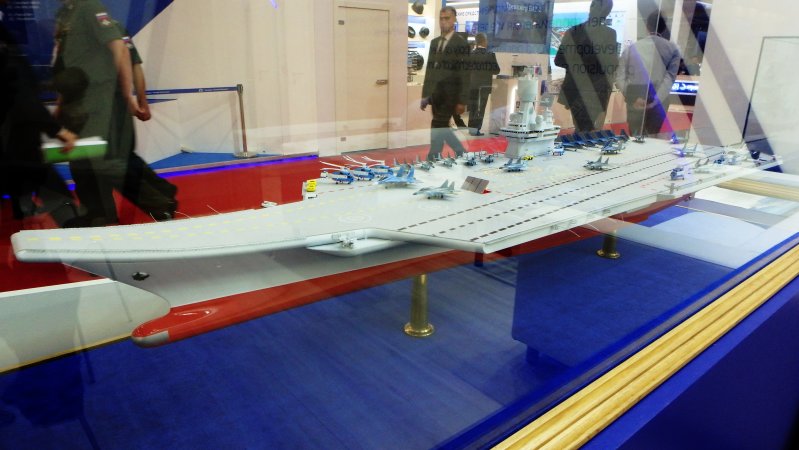 "Based on the model test results, the point is not a 1.5-2% drag reduction, which is within the measurement accuracy, but a radical one, up to 20%. With the same power and speed, were getting longer fuel endurance", shared the expert.

Besides, despite its limited displacement, the ships off-standard underbody shape and the hydrodynamic parameters will help to accommodate a well-balanced air wing, the carriers key weapon.

The presented LMAC blueprint was one of the two versions of the ships design, emphasized the scientist.

"Using the new solutions, we have increased the flight deck, thus resolving the problem of the aircraft deployment on board. Some issues of hydrodynamics have been addressed as well", summed up Polovinkin.

According to an informed insider, the Russian Navy is developing gradually: at first, they designed small-size missile ships, then came corvettes and frigates, which will be further followed by a destroyer, an amphibious assault ship and an aircraft carrier. Late in December 2018, Severnoye Design Bureau signed a contract for predesigning of Project 22350M frigates, a larger version of Project 22350 (Admiral Gorshkov class) ships. The project may become a bridging phase to a future destroyer.


In August 2017, Mil.Press Today reported about the concept of a light multirole aircraft carrier (LMAC) being designed by the Krylov center. The ship will displace approximately 35-50 thousand tons and carry about 40-50 aircraft. The designers believe LMAC would complement the Storm nuclear-powered carrier, while being cheaper and requiring less time for construction.

So far, in Russia the LMAC concept remains beyond the demand. In April 2018, Vice Admiral Viktor Bursuk, Navy Deputy Commander for Armament said they needed the carriers displacing about 70,000 tons, as they match the navys missions better.

However, designing of the advanced nuclear-powered aircraft carrier codenamed Storm will start around 2020, so the ship is to be built not earlier than 2030. Preliminary figures indicate the length as 330 meters, beam as 40 meters, and displacement as 11 meters. The ship will carry up to 90 aircraft of various purposes and 3,000 cruise missiles and air bombs. Such details as a ski ramp or a catapult will be clarified at the technical design phase, added Viktor Bursuk.