Russia to Equip Subs with Anti-Torpedoes

Diesel electric submarines being built for the Russian Navy are planned to be equipped with anti-torpedoes, reports FlotProm referring to Alexander Buzakov, director general of the Admiralteyskie Verfi shipyard.

"Yes, we're planning that. A submarine must be capable to protect herself", he said without disclosing any details. 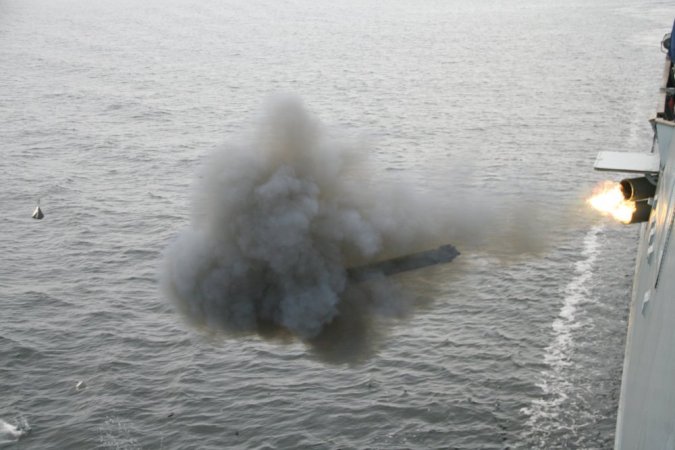 Currently, submarines are capable to defend themselves only through own maneuverability. For instance, a Project 705 Lira-class submarine developed in the USSR specially for duel situations had dynamics and maneuverability features that allowed her to accelerate up to 41 knots from standstill only in a minute and make a U-turn only within 40 seconds.

Anti-torpedoes help to destroy attacking hostile torpedoes on approach to the zone dangerous for a submarine. As of today, in Russia the torpedo defense system is implemented only as a surface ships configuration with a launch from 324-mm torpedo tubes. It is called Paket-E/NK. In case an enemy launches first, the system helps to neutralize the threat at the distance of 1,400 m from a ships board.

Anti-torpedoes of the Paket-E/NK system are positioned under water with a program set by the ships onboard equipment, and when approaching the target torpedo they are guided by the acoustic active/passive homing system. An anti-torpedo is capable to gain the speed of up to 50 kph and carry a warhead yielding up to 80 kg in TNT equivalent.

According to underwater weapons experts, including of anti-torpedoes into armament set of Russian submarines will considerably improve effectiveness of their torpedo defense capability and export potential.