The Kompas Design Bureau (Moscow, Russia) has developed a satellite-aided landing system for deck-based helicopters by the order of the Defense Ministry. Being assisted by GLONASS and GPS, the system controls descending of rotary-wing aircraft on ships stern landing pads in all weather conditions. The project is tested on the Sovershenny corvette.

"State trials of the satellite-aided landing system for deck-based helicopters Ka-27M are at the closing stage on the Sovershenny corvette. The landing process is automated. Using mathematical software decision-making techniques, a helicopter approaches a ship along a preset trajectory and hovers at 30 meters above a landing pad. Then a pilot manually land the helicopter", Mikhail Pestrakov, commercial director for special projects at the Kompas Design Bureau, told Mil.Today. 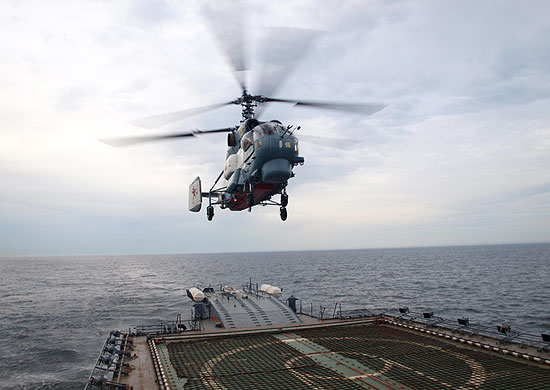 The satellite-controlled landing system consists of two elements, an airborne and a ship-based one. The projects components are completely made in Russia.

"The tests have been lasting for several years now", Pestrakov added. "It is a number of tasks that are to be completed with certain accuracy. The system analyses position of a helicopter and a ship, takes due account of climatic and weather conditions, selects landing approach trajectory, computes hovering and landing procedures. The instrument facilities fix and process the results in terms of accuracy, time, mission completeness and other trials conditions".

Today, naval pilots land helicopters manually, Gen. Alexander Akhlyustin, an expert and the honored military pilot of Russia told Mil.Today. "Approach can be completed automatically, using instruments, but the last meters are controlled exclusively in manual mode, as the ship keeps on going up-and-down and left-and-right. One of solutions for that problem is a gyro-stabilized landing pad on the ship deck that would remain level at any pitch and roll", Akhlyustin said.

Internationally, the automatic landing systems are being introduced for deck-based UAVs. In 2012, France completed trials of D2AD, a takeoff/landing system for the compound aircraft H-6U based on the Boeing MD-530А helicopter. It can be controlled by a person or operate in the unmanned mode. D2AD can work without GPS navigation, being guided by the shipborne transponder beacon. Trials onboard the La Fayette-class frigate have proved the possibility of automatic landing at the force-3 storm, further computer modeling expanded the D2AD applicability limits up to the force-5 sea disturbances.