The DT-3PM two-section tracked armored transporter designed for Arctic continues state trials and will be certified by the interagency commission by the end of this year, Alexander Ivanov, the director general of the machine-building company Vityaz told Mil.Press Today. According to a source in the Russian Army Tank & Automotive Command, the rover was made under the R&D project codenamed Korobochka.

The vehicle is designed for transportation of personnel and weapons, as well as towage of artillery systems and army trailers. DT-3PM was developed for extreme climatic conditions like virgin snow, cold deserts, woods, swamps and mountains. The off-roader began state trials in December 2017. 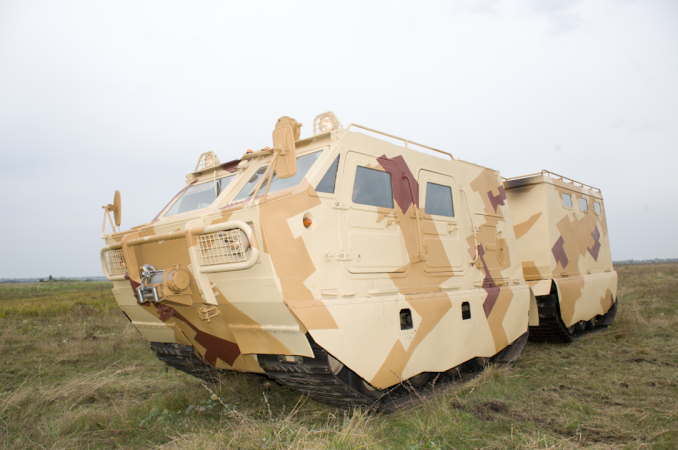 Initially, the transporter was powered by the 240-hp engine YMZ-540 (Yaroslavl, Russia), and in 2017 the vehicle obtained the new 312-hp diesel YMZ-53677. The new generation YMZ-530 powerplant by Autodiesel considerably improved the rovers maneuverability, the engine designers told Mil.Press Today.

Key objective of the Korobochka project is to create a vehicle capable to lift about 3 tons that would fill a niche between the heavy transporters DT-10 and the light cross-country transporters.

Korobochka was developed by two companies at once, Vityaz and Zavolzhsky Crawler Vehicle Plant (ZCVP). The latter has already launched mass production of its variant, the two-section tracked snow/swamp-going vehicle GAZ-3344-20, which has effectively passed Arctic trials. ZCVP will supply 105 GAZ-3344-20 vehicles to the Russian Defense Ministry, said the company director Oleg Guryev.

An insider in the Russian military shared with Mil.Press Today that following the trials, DP-3PM might be also commissioned, as that vehicle lifts 250 kg more than GAZ-3344-20. Both crawlers are to be actively used to support Russian troops deployed in Arctic, added the source.