At the yearend, Pacific Fleets diesel submarine division will obtain a damage control and powerplant operation simulator for the crews of Kilo-class subs being built in St. Petersburg. Personnel will improve algorithmic control skills of a diesel submarine in a home station, two informed industry-related sources told Mil.Press Today. This is what distinguishes the new system from the previous simulators supplied to the navy and primarily designed for operator skills practice.

The work is performed by a joint team of scientists, designers and engineers from Rubin Design Bureau, Admiralteyskie Verfi shipyard, Saint Petersburg State University, and a local company that earlier provided the navy with portable onboard data support systems. They are designed for crews of Project 636 submarines to practice powerplant operation, damage control and lifesaving activities.

The common workstations system (CWS) will be made in three stages. In March 2019, the second stage is to be completed in St. Petersburg with CWS mockup acceptance tests. The third stage will start in April, when the systems software will be adjusted up to the end product; the workstations will be delivered to Pacific Fleet, deployed at the submarine division, and tuned up for personnel drills. After that, the pilot version KURM-06363 will get the O1 code. "The third stage is expected to crown the whole project", an industry insider told Mil.Press Today.

One of the systems designers said it featured compact size and light weight due to quitting of the full-size control panel simulators previously supplied to the navy. They are replaced with 12 four-display workstations that show images of required panels or systems. This helps to place CWS in the classrooms of naval units in direct proximity to quayside. Thus, the system does not substitute practice on the classic simulators at the Naval Training Center in Obninsk, but complement it as a round-the-corner facility.

"The computerized simulator for submarine operation and damage control is based on a sophisticated mathematical model including hundreds of differential, algebraic and logic equations. The mathematical model provides a sufficient accuracy for modeling of most physical processes accompanying motion, maneuvering, and damage control", one of the project designers told Mil.Press Today.

According to information available to Mil.Press Today, the system is capable to actualize the processes appearing in surface or underwater motion, at standstill position, at calm or unsafe sea. Therein, the system takes into account rudders position, condition of all kinds of ballast tanks, impact of variable load (including weapons) on motion parameters, different water density at various depths, regions and seasons. 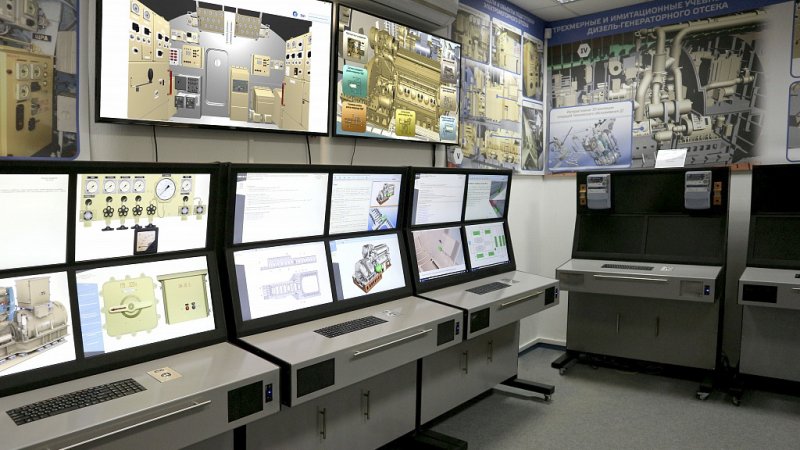 To practice damage control activities, CWS is capable to model failures of the submarine control elements, breakdowns of electric power system at a compartment flooding, emergency water entry with regard to parameters of a hole, depth, and even possible water leakage to adjacent compartments through untied bulkheads. Also, the simulator allows for practice firefighting activities in a compartment with leakage of gas/air media, pressure relief and ventilation of compartments.

Earlier on, the simulator system named Cassiopeia was designed for Kilo-class subs by NPO Aurora and R.E.T. Kronshtadt. One of such facilities was installed in the Osipenko Naval Training Center, submariners are already training on it. Similar simulator was also sold to Vietnam to train crews of the Russian-made subs, designers of Cassiopeia told Mil.Press Today.

The interviewees stressed that the common simulator that integrates all onboard systems allows for the crews to practice any processes and emergency situations on shore.

"There are two key development trends of such systems", said an engineer of NPO Aurora. "The first one implies integrated simulators to train crews in operation of technical and combat equipment. The second one is training facilities to practice damage control issues: fires, partial flooding, diving practice and escaping from a distressed sub", explained the expert.

According to an insider in the project 636 developer, Rubin Design Bureau, the training systems for those subs are integrated by the bureau. The most competent organizations are engaged to perform the corresponding works, he added.

Admiral Viktor Chirkov, top advisor to the president of United Shipbuilding Corporation and Russian Navy Commander-in Chief in 2012-2016 emphasized the importance of support to development of advanced simulators. "The navy is developing, improving, getting new ships and submarines. The foreign navies are developing in the same way. We need to build up training facilities proactively and continuously, as it is a basis of submariners' training program. Without that, we cannot move ahead", the official told Mil.Press Today.


Pacific Fleet is to be enhanced by six Project 636.3 Kilo-class diesel submarines. First two of them, Petropavlovsk-Kamchatsky and Volkhov, were keel-laid on July 28, 2017. They will be commissioned by the end of 2020.

Project 636.3 submarines are designed for antisubmarine and antiship warfare, defense of naval bases, sea and littoral lanes. The subs length is 73 meters, beam is 10 meters, test depth is 300 meters, submerged speed is 20 knots, endurance is 45 days, crew is 52 men. The submarines are armed with six 533-mm torpedo tubes, mines and Caliber attack missiles.