The MSS-3000 remotely operated underwater vehicle (ROV) was demonstrated to the military and civil experts in St. Petersburg on March 27. The submersible is designed and batch-produced by Marine Geo Service. The presentation was attended by delegates from the dedicated naval institute and industry-related experts. The vehicle was presented onboard Project MPSV12 Bakhtemir rescue tug, informs the Mil.Press Today reporter attended the event.

The presented ROV is a light operating class vehicle. According to designers, MSS-3000 may search flight recorders of lost aircraft, examine wreckage area by sector-scan sonar and broadcast the underwater scene by several, 4 to 8, HD cameras. 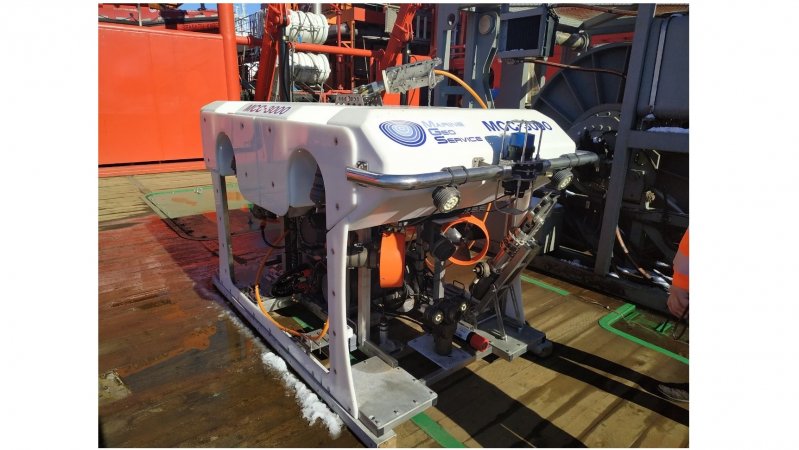 The submersible was designed proactively and is produced commercially: two samples have been already built; other three are at production line. Four of them will be supplied to Project MPSV12 multirole rescue tugs developed by Marine Engineering Bureau. The four-ship series is being built by Nevsky Ship repair Plant.

The ROV is capable to operate at the depths down to 3,000 meters and carry 150-kg payload. The submersible weights 1,200 kg. Max horizontal speed is 2.5 knots, the vertical one is 1.2 knots.

Any ship equipped with the dynamic positioning system and sufficient useable deck area (frame, windlass and ROV) is suitable to operate the ROV. Also, MSS-3000 with the control system and the repair section can be placed in a 20-foot container.

Once improved with a circular saw and hydraulic rope cutter, the ROV with similar functionality and features can be used for rescue operations of distressed submarines crews, a representative of the specialized naval institute told Mil.Press Today.

The companys technical director Alexey Shmatkov said the vehicles modular design enabled it to be promptly adjusted for a particular mission.

MSS-3000 can be employed by ocean scientists, oilers and rescuers. ROVs of this class are perfect in mine search and destruction by the onboard charges. Using such a submersible, experts may examine the underwater pipelines. Designers say it can also inspect the seabed cables and run instrumental diagnostics of their buried parts.

The function of this kind is helpful in the shortage of cable laying vessels. Example, late in 2016, experts of Atoll Research Institute failed to finalize inspection of the damaged cable of MGK-608M underwater sensor system, as the Inguri vessel was redeployed for other missions.