The first serial Project 12700 minesweeper Georgy Kurbatov will be launched in 2019, press service of the Sredne-Nevsky Shipyard told Mil.Today. Thus, the ships commissioning has been delayed for almost two years now.

According to the shipyards spokesman Alexander Malakhov, the second and third minesweepers in series, Ivan Antonov and Vladimir Yemelyanov, will be launched earlier than Georgy Kurbatov, in March and May-June 2018, respectively. 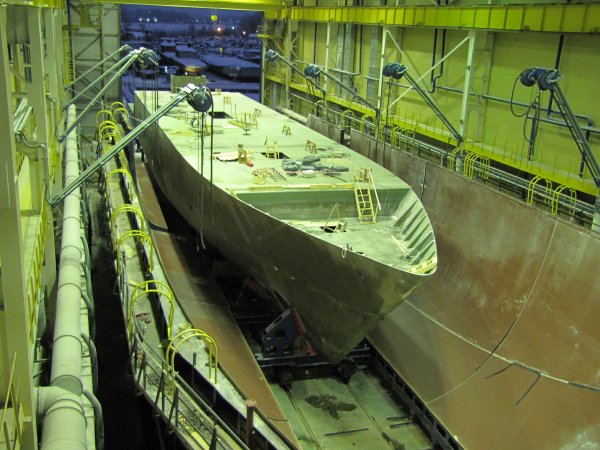 Currently, the shipyard jointly with the ship strength research and composite structures design laboratory of the Krylov State Research Center continue repairing the hull of Georgy Kurbatov minesweeper. An insider in the Krylov center told Mil.Today that recovery of the ships composite hull had been generally finished and would be completely repaired by May of 2018.

The ship was supposed to be launched in September 2017, the delay is due to the fire happened on June 2016 and seriously damaged the minesweepers hull. Firefighters reported the fire had covered 600 square meters of internal plating. Soon after the accident, the yards managers announced that the ship would be handed over to the military on time, despite the incident. Minesweeper Georgy Kurbatov was laid down in April 2015.

By the way, the Sredne-Nevsky Shipyard is being prepared to build the fifth Project 12700 Alexandrite-class mine countermeasures ship for the Russian Navy. The keel-laying ceremony will be held at the year-end.