After the report published by Voennoe.RF about the strike on the Kotelny Island against the months-long wages arrears, the money began to arrive in the builders bank cards.

The money started to arrive in Friday evening, October 29. That information was confirmed by relatives of four employees of the Zapsibgazprom-Gazifikatsiya LLC working on the Kotelny and the Vrangel islands. 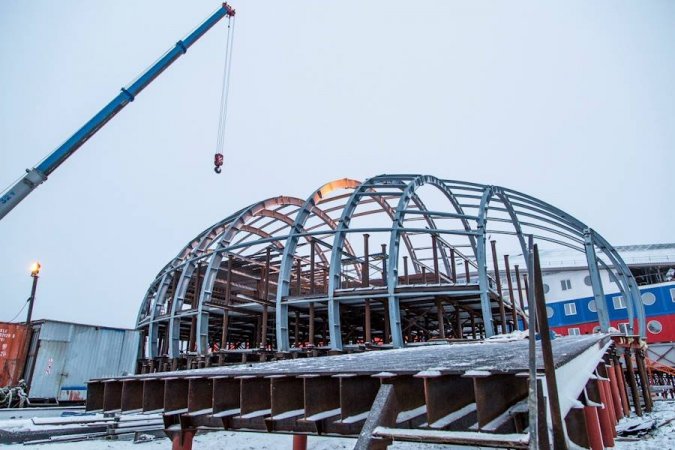 The Northern Clover military base, the Alexandra Island

Nevertheless, the wages arrears have not been liquidated in full, and by no means all specialists received payments as of Saturday evening, October 30.

"We were paid only the salary, but without overtime payments and a compensation for two-month long arrear", said a wife of an ex-builder constructing the military camp on the Kotelny Island. As for her, about 30,000 roubles arrived in the account, while remaining debt of the company makes about 120,000 roubles. "These are overtime payments and compensations", emphasized the interviewee. Moreover, the company still has not paid the travelling expenses for the homeward journey.

"First money have arrived. Two unclear sums mismatching with emailed payment documents, we must puzzle out everything", said a wife of another employee.

Meanwhile, civilian specialists constructing military facilities on the Vrangel Island and the Schmidt Cape have not received funds from the employer, RusAllianceStroy LLC, at all.

Earlier on, Voennoe.RF reported that the employees of the Zapsibgazprom-Gazifikatsiya LLC working on the Arctic island of Kotelny had gone on the strike against months-long wages arrears. For the same reasons, construction of military facilities on the Alexandra Island at the Franz Joseph Land was suspended as well.

In addition, builders of the military infrastructure on the Vrangel Island and the Schmidt Cape have not received any payments.

On Friday, October 30, after publication on Voennoe.RF, deputy defense minister Dmitry Bulgakov visited the Arctic region. Major purpose of his trip was to inspect the course of construction of facilities within the responsibility area of the Northern Fleet Joint Strategic Command and to check logistic support of the deployed forces.