On Tuesday, November 17, peaceful life returned to the southeast Ukraine. After brief battles, people of Donetsk and the near-front town Gorlovka live in a calm atmosphere.

According to Donetsk citizens interviewed by Voennoe.RF, in the recent days sounds of explosions are heard only from far away. "Today is quiet, nothing is heard, but they do make noise sometimes", said one of the respondents. Other three citizens confirmed this information. 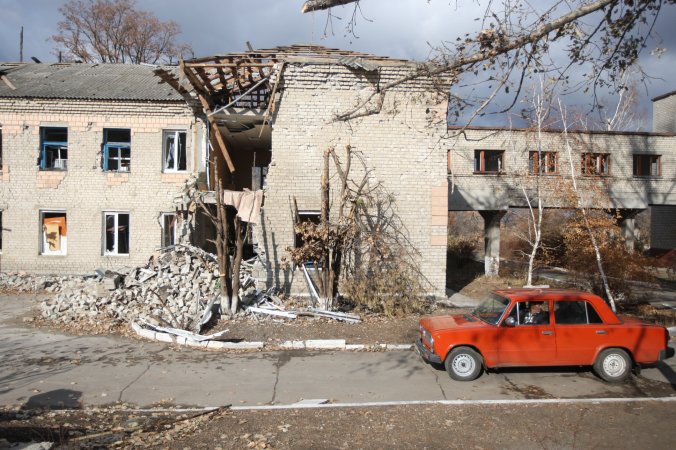 A building damaged by artillery shells
Photo by Nikolai Gontar

In Gorlovka, people heard low blasts at the weekend, by Tuesday battles died down and the cease-fire began. However, local people face troubles with gas and petroleum. "There is no petrol at stations at all, the lines for gas are huge", said one of the interviewees. As for him, if petrol reaches gas stations, its price is sky-high. For instance, average price of AI-92 liter near Yenakievo makes 60 roubles; dealers sell it at 70 roubles. The fuel is delivered to the southeast Ukraine from Russia.

On Thursday, November 12, Voennoe.RF got to know about resuming of mortar and artillery fire near Donetsk, Gorlovka and Debaltsevo. Earlier, local people noticed only minor skirmishes and shots of hand-held weapons.