Mil.Today has compared combat actions in Ukraine and Syria, trying to highlight key distinctions between these two ongoing conflicts.


Although the war in Syria has claimed hundreds of thousands lives and the Ukrainian conflict caused about 7,000 deaths, equipment and fire power of main participants in the ground campaign in Syria are far behind the power of adversaries in Donbass. Soldiers of Syrian regular army, let alone rebels, look quite scant on the battlefield even if compared with combatants of the self-declared peoples republics opposing Ukrainian military. The Donbass separatists operate far better and higher-grade equipment than Syrian governmental army. According to various sources, Ukrainian rebels buy battle suits, in contrast to heavy armaments, either by themselves or receive them as support from sympathizing people and organizations (mostly, Russian ones), not relying on capability of any government machine.


Combatants of the Free Syrian Army

In Syria, neither regular army nor numerous rebel groups can afford such things. Few combatants or loyalists may boast of at least Soviet helmets SSh-40/60 which were in vast numbers in the region at some points. Sometimes, outfit of regular soldiers and militants of various groups leaves much to be desired, even if compared to other local conflicts where non- state militia groups take active part.

The foregoing helmets are not the only one example. The opponent parties face the same problems regarding camouflage uniform, armor vests and other equipment. Even the lightest armor vest protecting only from pistol shots and small fragments can be seen only on special units of the Syrian army (unless one counts sham photos at parades, of course). Chest rigs are of the simplest design, and their outworn appearance is clearly seen even on low-quality photos.

Camouflage uniform is primarily used by Syrian army and deserters who fulfilled themselves in rebeldom. However, even among governmental troops one can find differently designed cammies, sometimes unsuitable for the field conditions. For instance, combatants of both parts have to wear green camouflage outfit even in desert, which makes them an easy target for each other.

Infantrys small arms in the Syrian conflict are primarily old versions of Kalashnikov rifles and machineguns, sometimes even AK-47. Islamists use obsolete handheld grenade launchers made in Russia, Croatia and Yugoslavia. Soviet heavy machinegun DShK is by no means an exotica in the IS* units. The Red Army commissioned its first versions back in 1939.

Having returned from Syria, military correspondent Dmitry Steshin confirmed this information during an interview to the Russian Planet.

While antigovernment units in Ukraine are equipped better than many armies worldwide, jihadist engineers sometimes have to make Khilafat-building tools from scratch. Homemade and handicraft armaments are everyday practice in the Middle East wars. Weapons that may hit targets only with the topmost grace of Allah have been appearing here for decades. Earlier, they were at least upgrades of batch-produced samples, but present-day inventors among Syrian militants manage to improvise really creative things on which background the use of a dredger as a missile launcher looks like a feat of engineering. 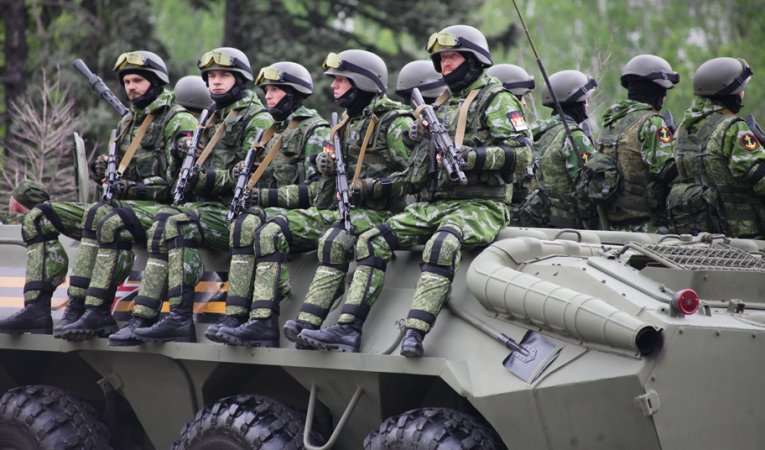 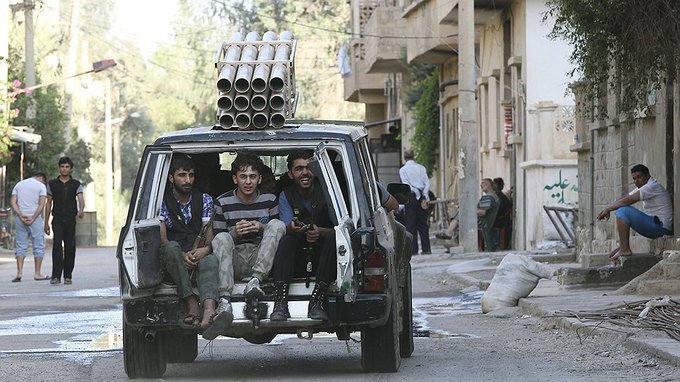 A kind of MLRS

In Ukraine, combatants of the peoples republics have completely closed the sky over their territory for Ukrainian aircraft. This was mainly achieved through availability of various useful things like air defense missile systems, including portable ones. The rebels shot down several Ukrainian helicopters and airplanes, so made themselves safe from further air attacks. Syrian militants failed to do that even against Assads warplanes, without mentioning Russian and allies aircraft.


Problems of the conflict parties are related not only to their equipment but directly to their actions on the battlefield. According to Dmitry Steshin, Syrian artillery allows itself to fire from the same positions during the whole week, which is "hard to imagine in Novorossiya (a self-declared state in the territory of Ukraine  editors note). Many times Syrian armored vehicles were seen entering urban quarters without any coverage, so sustaining unnecessary losses. Moreover, regular armys tanks are not equipped with any elements of active armor, thus are often hit by anti-tank rockets and guided missiles launched by even unskilled zealots. The web is full of videos with a rebel wearing flip-flops and puncturing a Syrian tank with American BGM-71 ?OW.

All parties of the Syrian conflict lack professionalism and one can see that on any videos. Snipers shoot off several magazines without changing of position, riflemen fire from the hip at standup assaults, positions and checkpoints have not a tithe of fortifications that can be seen in Donbass.

Insurgents and militants often substitute artillery preparation with home-made mortars fire or a suicide bomber driving an APC, a tank or a truck staffed with explosives. According to the rebel tactics, he approaches a fortified facility and explodes himself thus destroying opponents manpower and causing panic. Sure, these quaint actions at the Syrian theater are not as effective as cannonades of Giatsint howitzers and Tyulpan mortars; even non-combatants in southeast Ukraine have learned how to distinguish their roars from one another.

In fact, such actions are one of the reasons for tremendous losses in that war. One may find more details of the aforementioned rebels tactics in the video below.


However, in some areas the IS* militants leave any other rebels far behind. For instance, raising money. By different estimates, this organization monthly sells oil to $ 1.5-3 mln. To compare, cost of a Russian strike aircraft Su-25 is within these limits. Take note, this is only oil income, not including other serious sources of IS* capitals, e.g. sponsorship of Doha- and Riyadh-based patrons, as well as slave trading. Few insurgents may boast of such incomes.

Financial ability gives rise to another success of the IS* that the Donbass peoples republics have not gained not by a third. The propaganda. Considering poorness of IS* equipment and high grade of propagandistic materials, it becomes apparent what the jihadists spend their money on. The IS* propaganda has attracted Muslims from all over the world to Syria, even those who had never even felt interest in radical islamist movements. In its turn, propaganda of the Donbass rebels is at bottom level and does not resonate properly even with sympathizers.