Marine Technics Group has designed technical project of a powerplant with partial electric propulsion for boats displacing 60-140 tons. The concept is based on upgrading of the propulsion diesel with main motors, shaft generator and a battery, which will help a boat move at up to 6 knots almost silently. 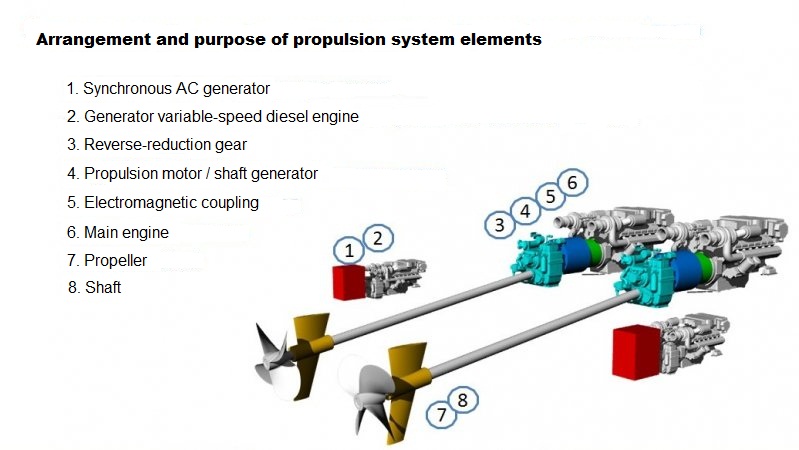 According to him, the use of electric powerplant at low speeds is reasoned by the fact that 60% of operational time a boat either stays in standby mode or maneuvers at speeds below 6-7 knots.

"Combined operation of main engine and propulsion motor will increase maximum speed as well. Moreover, the powerplant may substitute an onboard diesel generator, which will save fuel and extend range", Popov added.

Valery Kiselev, an officer of Vympel special operations unit and FSB frontiersman explained that the speed of 6 knots was insufficient for special missions and border patrols.

"The advantage of electric motor over diesel in lower noise and vibrations is not so critical, as an opponent uses radars and other sensors to detect the threat. Sure, increased range and redundant systems are really important factors, but it would help rather FSB Coast Guard than any special operations", Kiselev said.

Head of the electrotechnical department of the Vympel ship design bureau Damir Umyarov says these technologies are very promising, but one should calculate operational economy at first.

"If designing and introduction of the hybrid powerplant, as well as its further operation on boats, would be cheaper than a diesel engine, it should be definitely incorporated", he stressed.

Today, the prototype powerplant with partial electric propulsion is 90% made of foreign components; however, experts of Marine Technics Group assure they are already working on their substitution with the Russian analogs.

"The technical project was prepared for ice-class utility boats ST23WIM-E displacing 70 tons and being massively produced by the company for Rosmorport", added Alexander Popov.