Project 11442 Orlan-class heavy nuclear-powered missile cruiser Admiral Nakhimov is planned to have new Russian-made fire detection systems, an insider in Severnoye Design Bureau told Mil.Press Today. The corresponding Gamma-01F system was designed by NPO Fire Fighting Automatic Service (NPO FFAS), he shared. The company is to conclude the contract with Sevmash shipyard to equip the cruiser with fire, heat alarm and security signalling systems; the document was sent to Severodvinsk on April 24, 2018.

"Initially, Orlan-class ships were equipped with the band-aid heat-alarm system with ST-072M thermal sensors. Their operation level is 70 degrees. Moreover, this system was installed only in power generation and engine rooms", explained the interviewee. 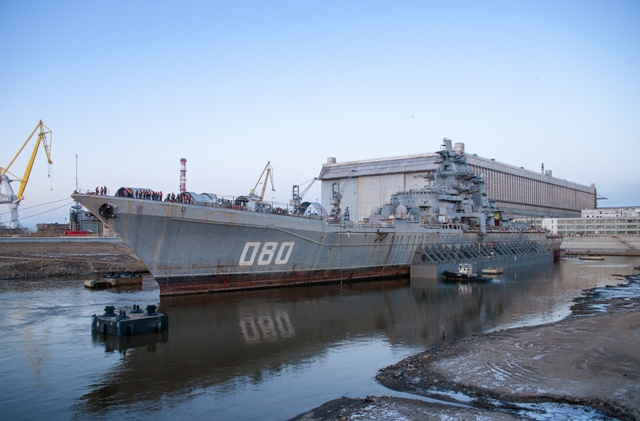 He added that the equipment was obsolete and worked unreliably. ST-072M sensors were produced by Ivano-Frankovsk instrument engineering plant in Ukraine. New sensors of Gamma system are made in Russia, so one may talk about import substitution, too, concluded the source.
Currently, Severnoye Design Bureau continues capital repair and modernization of Admiral Nakhimov cruiser (Project 11442M). Reportedly, by the end of December, the experts are to finish development of designing documentation for the fire alarm system.

Valery Klimentov, director of the northwest office of NPO FFAS confirmed to Mil.Press Today the information about mounting of Gamma-01F systems on Admiral Nakhimov cruiser. Being asked to tell about advantages of the new system, he said that the 70-degree threshold was inadequate: "The fire may rave at lower temperatures as well". Klimentov added that the modernization program expanded number of premises to be equipped with the advanced fire alarm units, not only power rooms.

The security alarm will be replaced, too. Original system installed on the cruiser was designed for other kind of ships back in early 1950s. NPO FFAS declined to specify the contract price. Mil.Press Today sent a corresponding request to Sevmash shipyard. The modernized Project 11435 aircraft carrier Admiral Kuznetsov will also obtain the new fire alarm system. The ship will get instruments of Crab-M system designed and produced by the Russian company named Krizo. According to available information, the system costs about 500 mln rubles.


Admiral Nakhimov (formerly Kalinin) is the third ship in the series of Orlan-class heavy nuclear-powered missile cruisers (Projects 1144 and 11442). The ship had been mothballed since 1997. The overhaul and modernization contract was signed with Sevmash in 2013. The cruiser was moved to the shipyards wet dock in 2014, and in 2016 the onboard equipment was disassembled.

The actual specifications for fire alarm systems were established in 1989, such systems have not been renewed on cruisers Petr Veliky, Moskva and Varyag yet. Repair and retrofitting of the last operational Orlan-class ship, Petr Veliky, is scheduled in 2020. Cruiser Moskva started overhaul at the 13th Ship Repair Plant, though the modernization most likely will take place at Zvezdochka. Severnoye Design Bureau has not received funds for such project so far.