The conceptual project of the third aircraft carrier in the portfolio of Krylov State Research Center (KSRC) will be presented to wide public at the International Maritime Defense Show IMDS-2019 in Saint Petersburg. The debut was announced by the KSRC director, Pavel Filippov in the exclusive interview to Mil.Press Today.

It was reported about development of the concept of the "middle-sized" aircraft carrier displacing 76,000 tons at the Army-2019 military forum. The ships model has not been presented yet. 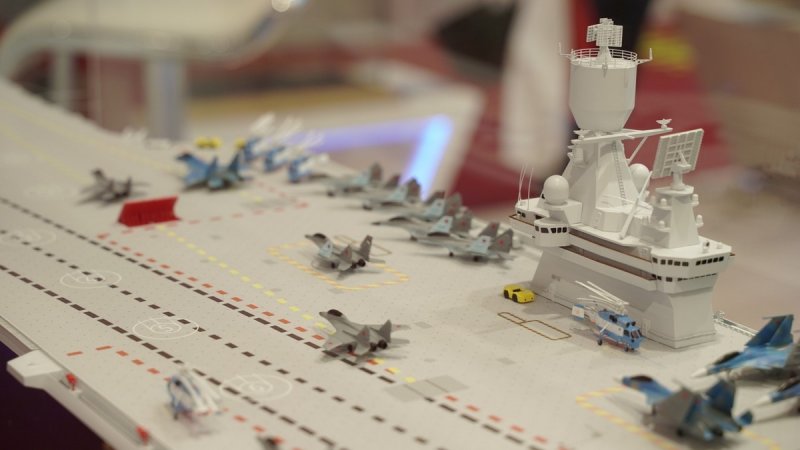 What was presented at the KSRCs booth was only the model of the carrier displacing 44,000 tons. The ship is codenamed Storm-KM. It was demonstrated for the first time at the Army-2018 forum last year.

In his interview to Mil.Press, director of KSRC Pavel Filippov said the mid-sized aircraft carrier held an intermediate position between the heavy Project 23000E ship (displacement 95,000-100,000 tons) and Storm-KM multirole carrier (displacement 44,000 tons). It is planned to have a combined powerplant: nuclear plant similar to that of the Project 855 Yasen submarine will act as a sustainer, and the gas turbine based on M90 engine will serve as a booster.

Designers told Mil.Press Today that the model of mid-sized aircraft carrier has already passed a range of trials in the testing basin of the Krylov center.


On the first day of the Army-2019 forum, representatives of KSRC told Mil.Press Today that their center would present the completed line of aircraft carrier conceptual projects to the Russian defense ministry in June or July.

As was reported earlier in June, the Russian Navy started drafting technical development plan for the future aircraft carrier.