On Tuesday, November 24, Turkish Air Force shot down a Russian bomber Su-24 over Turkish-Syrian border that allegedly had incurred into Turkish airspace. Reportedly, pilots managed to eject. Mil.Today has figured out what may happen to the shot-down pilots and how they should act in such situation.

According to standard regulations, at first a pilot shall leave an aircraft through ejection, said Aleksander Akhlustin, honored military pilot of the Russian Federation. A parachute is equipped with a survival pack including essential things like water, ammunition, portable radio set, and a special position marker that will help search-and-rescue service to find location of the pilot and send a rescue team. The beacon operates automatically, in a second after ejection. 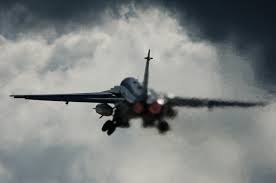 "Normally, two groups are sent to the accident site, a ground and an air one. The latter may be a helicopter or an airplane group. If the group is airplane-based, it drops a paratroop unit that will search and evacuate the ejected pilot", said Aleksander Akhlustin.

Another aviation expert, a Su-24 pilot and Afghan war veteran Vladimir specified that most likely a helicopter squadron would be sent to find the crew and provide simultaneous air coverage. For instance, in Afghanistan in similar situations they used to send a Mi-8 helicopter and several Mi-24 strike helicopters. "While Mi-24s armed with aircraft-based rockets were shooting back, the Mi-8 landed and evacuated the crew", he explained.

All further actions of pilots depend on the circumstances, said Akhlustin. For example, at quiet area a pilot may stay near the beacon waiting for help, but in the current situation the pilot should rather leave the landing point, find a safe place, camouflage himself and wait for help.