Four Russian warships launched away almost complete load of Caliber cruise missiles upon militants of Islamic State. Twenty six missiles out of 32 available were launched at once and flew towards jihadists at the speed of 274 mps. Russia used to sell export variants of Caliber to Indian Navy at a price of $3.5 mln per one missile. Thus, such missile attack could have cost defense ministrys budget up to RUB 10 bln. Sure, for own armed forces ammunitions prices must be lower, but is the difference so large?

On Tuesday, October 7, Caspian Flotillas missile ships Dagestan, Uglich, Grad Sviyazhsk and Veliky Ustug (Project 11611K and Project 21631) went through baptism by fire, having attacked not training but real targets for the first time. So what was finally that massive missile attack? Real practical and operational need, testing of sailors and weapons in real combat environment or just a muscle show? The latter seems the most probable. 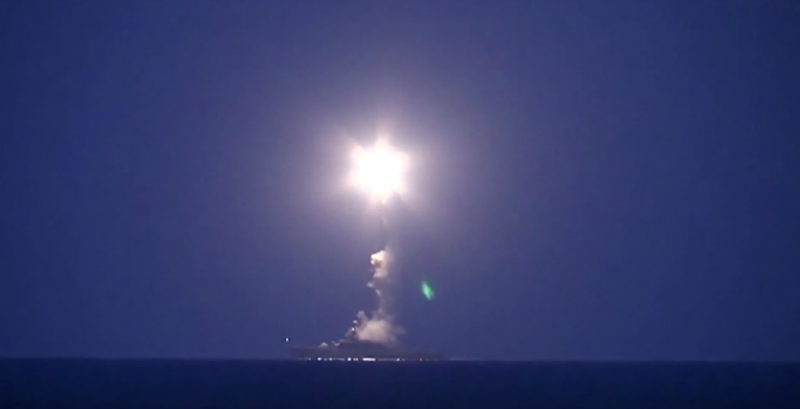 
Russian defense ministry unexpectedly decided to punish islamists by firing over twenty cruise missiles totally costing like several newest bombers Su-34. All this things rather look like a Khrushchev-style desire to demonstrate power than a practical necessity.

Simultaneous launch of 26 cruise missiles over territory of two countries to a distance of 1,500 km is a clear message, but not to terrorists. This is a kind of a wake-up call sent in such manner to entirely different receivers abroad. In this way Russia shows its decisiveness and capability to use all available tools in its own interests.

Russia has demonstrated today what its shiplets can do with only eight cruise missiles on board. The newest frigate Admiral Gorshkov being on the point of commissioning, is armed with 16 missiles of this kind. Perhaps, Syria may become a training range for this frigate, to hold thorough missile trials under real combat conditions. However, another up-to-date Russian frigate Admiral Grigorovich equipped with eight Caliber missiles will join the Black Sea Fleet much faster.

Todays missile launches performed by Russian naval ships upon Syria are unlikely the last ones, defense ministry will certainly try to repeat them or attack terrorists from waters of the Mediterranean Sea. Especially given that the Black Sea Fleet recently commissioned a new diesel electric submarine named Novorossiysk carrying up to four Caliber-type cruise missiles. So, let us wait and see to what extent the possibility of submerged missile launching upon real targets would be exciting for Russian military.