Russian field engineers who had demined Syrian Palmyra were triumphantly met in the homebase in Murom, Vladimir Region on Friday, May 27. 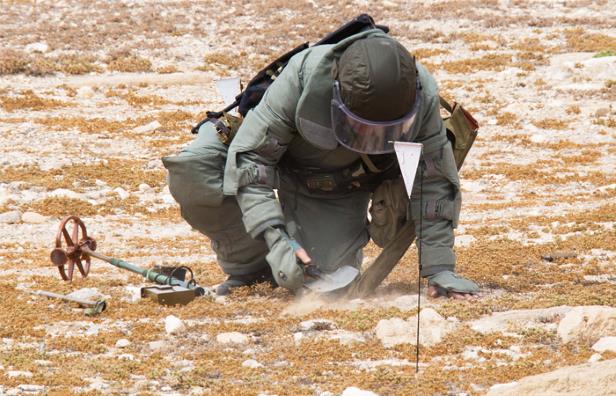 The mine pickers were met by Engineer Troops' top officers, regional administration, relatives and friends. Yury Stavitsky, the Engineer Troops Commander, handed out military awards to the minesweepers.

Being stationed in Murom, the 1st Engineer Brigade was established in December 2014. It is a reserve of the Russian armys Supreme Commander and equipped with antimine robots Uran-6. These 6-ton machines used for disposal of antipersonnel mines are remotely controlled via radio channel from a shelter that can be 1 km away from a minefield.

In Palmyra, Russian military engineers have cleared 825 hectares of land, 8,500 buildings and structures, detected and neutralized about 18,000 explosive objects.

"Russian minesweepers had to face new sophisticated ways of planting of explosive devices by terrorists, such as radio- and wire-controlled IEDs, anti-handling devices, and lots of various mine trepans", said a defense ministrys spokesman.

Except for engineer units, the team comprised a K9 unit with mine-detecting dogs.

Personnel, engineer and special vehicles arrived in Novorossiysk by a landing ship from Syrian port Tartous via the Mediterranean and the Black seas, and then by rail reached the final destination in Vladimir Region.

On May 5 it was reported on completion of the minesweeping mission, and on May 20 Russian defense minister Sergei Shoigu announced returning of the mine pickers. According to him, only a team of instructors remained in Syria to train Syrian engineers.